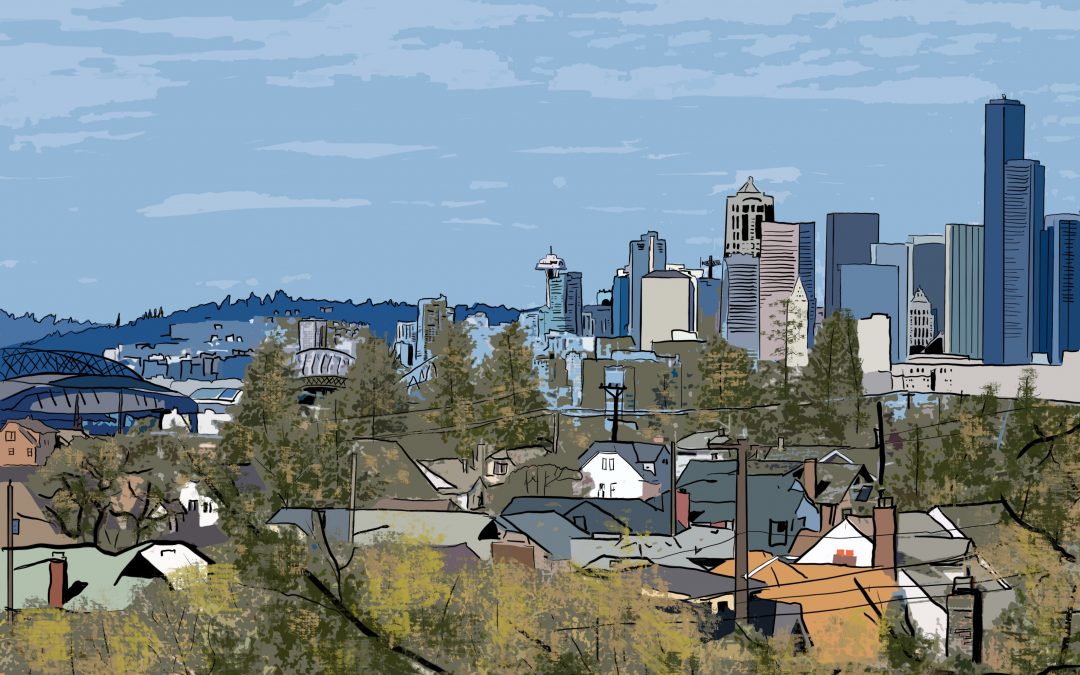 Written by Irene Muller | Published November 9, 2022 by the Church Council of Greater Seattle

Media often depicts Seattle as a capitalistic fairytale, a story of boundless abundance and the pioneering spirit of skyscrapers. Yet in this city of vanishing landmarks and increasingly displaced local communities, one 100-year-old house with a new name emerges as a vibrant example of what is possible when we build together toward a different future, one where everyone is heard, healed, and housed.

In August, we celebrated the Trans Women of Color Solidarity Network’s (TWOCSN) House of Constance finding a new home, in partnership with Seattle Mennonite Church (SMC) and with support from the Church Council of Greater Seattle’s Faith Land Initiative (FLI). The House of Constance program is named in loving memory Constance Blakeley, Core Organizer of TWOCSN who passed away at the age of 27 years old on October 2, 2020.

The landmark moment when this property officially transferred owners from SMC to TWOCSN is one part of a remarkable journey. Many steps taken together in trust brought us to this incredible exchange, and there are many steps yet to take into the abundant future of dignity restoration through community stewardship of land.

What does it take to create sustainable space for community to take root in a city with one of the most competitive real estate markets in the United States today, whose culture is increasingly dominated by corporate greed?

What is it we are called to do?

In listening to faith leaders and faith communities, we heard this growing edge of our community being called to a shared mission, seeking a framework to move forward in faithfully discerning the future of faith-owned land.

Seattle Mennonite Church were similarly called, and in listening to them FLI was able to offer accompaniment through the discernment process in ways that supported their mission, vision, and values. SMC had a powerful opportunity to invest in community as owners and stewards of an 8-bedroom house in Capitol Hill, where market speculation has drastically raised property values and contributed to mass displacement.

Through this process, SMC recognized that selling the property would contribute to market speculation, which was not reflective of their values as a historically white congregation seeking to “make a reparative act for this history of white supremacy, and to follow the lead of those who were and are most impacted by it.” To this end, SMC partnered with FLI to embark on a process of faithful and equitable land discernment, uniting their existing values with those learned and embodied together along the way.

Why is this discernment work necessary?

Too often, land is viewed as a commodity instead of our nurturer. As a result, it is constantly in transition. Our system of market speculation rapidly raises the price of an acre while simultaneously depressing the incomes of the people who cultivate and belong to that land.

Churches, and the people who belong to them, are in a unique and powerful position to make an impact. Nationwide, there are vast acreages of underutilized land owned by faith communities. In the City of Seattle, there are 300 acres, many which are eligible for development (City of Seattle, Office of Community Planning and Development).

The practice of redlining benefited white people and faith communities, with a disproportionately negative impact to Black, Indigenous, Asian, and other People of Color, as well as Jewish people. Historically white Christian faith communities and institutions are called to grapple with our own unique complicity in the reinforcement of white supremacy, and the ways it is foundational to the socio-political existence of Christianity. Furthermore, our continued practice of faith frameworks with colonial roots on occupied indigenous land, left unexamined and unaccounted for, inherently reinforces and perpetuates the violence of colonialism.

The first violence to deny people’s autonomy is the disregard or denial of their voice. Deep listening can become a restorative act, but it requires that we work to mitigate biases that keep us from truly seeing, hearing, and understanding each other. When we transform how we exist in the world, we transform our relationships to the land and our community in ways that not only disrupt systems built on white supremacy, but create new ones.

How did SMC build a strong foundation?

Long before arriving at consensus to act on this radical redistribution of wealth, Seattle Mennonite Church laid a foundation for the process of faithful land use by partnering with CCGS Faith Land Initiative organizers, E.N. West and Meli Morales.

“It is difficult to imagine any process as intentional and methodical and expansive. It helped us get clarity. Our team was at a moment of paralysis. E and Meli’s tools and homework, regular bi-weekly meetings, and great meeting facilitation helped us to reach clarity on our own values, understand our role…they seamlessly guided us to the next step,” the team of congregants called by SMC to steward this process reflected after the fact. “Their knowledge of BIPOC communities and leaders, and the issues that they are facing, was indispensable. They also gave us confidence and language to help us as we initiated our research meetings.”

SMC committed to the process of deeply engaging anti-racist values and frameworks, engaging in internal work to understand their social positioning, access to resources, and complicity in systems of continuous harm. As a predominately white faith community stewarding stolen indigenous land in a city whose discrimination against BIPOC homeowners and land stewards is ongoing, this was no small task.

In a letter to her congregation announcing the final decision to transfer ownership of the property, the Rev. Megan Ramer said, “As the team reiterated many times: There are many answers to the question of how to transfer the property in a reparative manner. There was not one single “correct” solution, but many. It is with this expansive understanding that we as a church were compelled to act.”

“In order to reach our goal of bringing the congregation to consensus, we found that it took a lot more intentionality and energy – it was more than just bringing a proposal, it was consensus building,” SMC’s team reflected. “We accomplished it in a way that was meaningful, and that helped the congregation grow in understanding.”

How do these connections get made?

Seattle Mennonite Church and the Trans Woman of Color Solidarity Network had never met or worked together before this discernment process began. E.N. West, one of the co-founders of the CCGS Faith Land Initiative, originally came to Seattle and the Church Council through a United Church of Christ fellowship program which housed them in the very home that became the subject of SMC’s discernment. Today, West is a Co-Director of Surge Reproductive Justice, a Black Queer- and Trans-led community based organization in Seattle, and in that role, they have built a relationship with members of the Trans Women of Color Solidarity Network. Through working with them regularly, West was aware of TWOCSN’s search for a home for the House of Constance.

Many organizations were consulted in the discernment of this house’s next chapter, including local tribes, land trusts, and other community collectives. Ultimately, TWOCSN’s dream of safe, dignified housing for 8-10 Black trans women and femmes and a community hub for Black queer and trans folks to build community and thrive together aligned most generatively.

This discernment process was made possible by the faithful collaboration of many communities, in conversation and action alike. It is the hope of all involved that the success of this collective process encourages faith communities faced with similar opportunities to discern the faithful use of land through an anti-racist framework and in deep relationship with community.

As Rev. Megan Ramer reflected, “We are extremely grateful for the expertise and knowledge of E.N. West and Meli Morales…their accompaniment was a tremendous catalyst in the SMC team’s process of communicating and connecting with organizations in the greater Seattle area.”

How does CCGS nourish this process?

When SMC reached clarity within their community that it was time to approach the decision of how to steward the house in their possession into a more liberated future for everyone in our community, FLI was ready to support their discernment process with resources, accompaniment, and connection to other faith communities in their own seasons of discernment around faithful land use.

On what roadblocks arose and how they moved through them, SMC’s discernment team reflected, “The framework that we were able to build upfront using the tools E and Meli provided – clarification of goals, identification of our values – made each next step clearer and prepared us for the things that came up.”

Since our 100th anniversary in 2019, the Church Council of Greater Seattle has been organizing internally for institution-wide, transformational change toward an organizing model that reflects and builds collective power with our communities. CCGS defines “Transformational Change” this way: Impacted communities have the power to fully tap into the abundance that is already present to transcend barriers to their autonomy and self determination. The fruits of transformational change include liberation, justice, joy, peace, and human flourishing.

Our Mission: The Church Council of Greater Seattle builds collective power through faith-rooted community organizing for transformational change toward liberation and justice.

Our Vision: The Church Council of Greater Seattle envisions a future when justice is realized, where all people experience liberation, profound peace, expansive equity, and joy-filled human flourishing.

In the celebratory Instagram post where they first announced the acquisition of the house, TWOCSN shared, “We are ready to receive and move with abundance for the benefit of our community. We are grateful for this partnership and for this act of accountability toward BIPOC trans community.”

One SMC congregant, who lived in the house decades ago, reflected in a document they shared with the whole congregation, “This old house has served its purpose and is ready to be released and reborn into its new mission.”

May we heed the call that draws us forward into a future where dignity is restored and thriving is the bare minimum for everyone in our communities, in Seattle and beyond.

« On the passing of 3 faithful leaders |