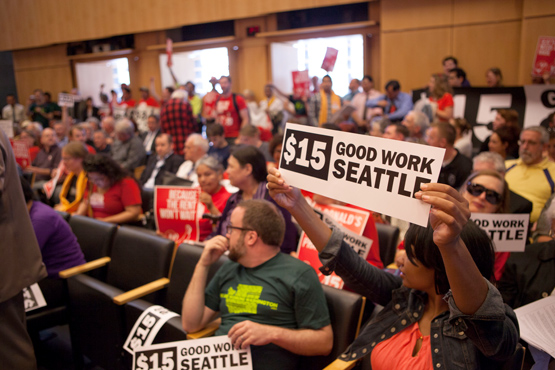 Today, Seattle City Council unanimously passed an ordinance, raising the city’s minimum wage to $15/hour for over 102,000 workers and their families. The Church Council of Greater Seattle celebrates the passing of this piece of legislation as an important step towards making a living wage vision more of a reality for many working people struggling to make ends meet.

The passing of the legislation is also a testament to the power of community organizing to bring important issues to table of local government and make tangible policy gains. It was just last year that the fast food workers went on strike, sparking the movement for a higher minimum wage.

As Michael Ramos, Executive Director of the Church Council of Greater Seattle commented, “No one would have thought that in less than a year there would be $15/hour minimum wage laws in both Seattle and SeaTac.”

The minimum wage ordinance will take effect April 2015 and has a 4-tiered phase in. Big businesses (defined has having more than 500 employees) will reach $15/hour in 2-3 years and small businesses (less than 500 employees) will have 5-7 years. The difference in phase-in time varies based on whether the business offers any form healthcare to employees. By 2025, all employers in the city of Seattle will be paying employees $18.13/hour.

| Litany of Gratitude, Lamentation and Hope »