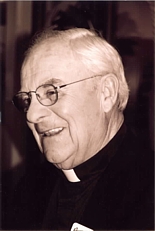 Blessed is the one who trusts in the Lord, whose confidence is in the Lord.  They will be like a tree planted by the water that sends out its roots by the stream.  It does not fear when heat comes; its leaves are always green.  It has no worries in a year of drought and never fails to bear fruit.    –Jeremiah 17:7-8

The Roman Catholic Archbishop Raymond Hunthausen served as the Archbishop of Seattle from 1975 to 1991. He was one of the great ecumenical champions of his generation, alongside such luminaries as the Rev. Dr. Bill Cate (Church Council of Greater Seattle) and the Rev. Dr. Samuel Berry McKinney (Mt. Zion Baptist Church). A man of deep conviction, pastoral care and commitment to inclusion and diversity, Archbishop Hunthausen embodied the vision of the Second Vatican Council in practice: empowered lay leadership of women and men in multiple dimensions of church life; updated and accessible liturgy and faith formation; shared decision-making; prioritization of marginalized communities; passion for justice.  His excellence as a servant leader and follower of the Gospel of Jesus Christ was carried out through a paradigmatic simplicity of lifestyle and humility characteristic of Micah 6:8. Rooted in the Pacific Northwest, Hunthausen lived out both his love for the church and his call to be faithful to the Holy Spirit with clarity of mind and heart and inner and outer congruity. He embraced the ecumenical movement through his befriending of denominational representatives and leaders in Western Washington and beyond. He was seen by many who were not Catholic as “their bishop.”

Hunthausen is remembered for his fearless witness for peace. His prophetic stance in opposition to the proliferation of nuclear weapons and in particular the Trident submarine and its first-strike capability brought him criticism, and even condemnation, from near and far, in a time of significant expansion of the nuclear arms race. Rock-solid in his understanding of the non-violent way of Jesus, he withheld payment of half of his federal taxes in protest of the arms race and permanent war economy that had emerged by the mid-1980s. The Archbishop, Bill Cate and the Rev. Loren Arnett of the Washington Association of Churches could be seen leading the largest march in the United States, 30,000 strong from St. James Cathedral to Saint Mark’s Cathedral, against the First Gulf War in 1991.

Michael Ramos, Executive Director of the Church Council of Greater Seattle, shared a personal reflection:  Archbishop Hunthausen was my bishop. His commitment to peacemaking and support of sanctuary for Central American refugees was part of my original attraction to come to the Northwest. He led by example, without self-promotion or manifestations of power and prestige. He was utterly sure of himself as a prayerful creature of God who once he felt the Spirit’s promptings, allowed himself to be guided by these without fear, with unshakeable conviction. My brief encounters with him were with someone who treated me with complete dignity and respect, co-equals in the cause of peace. One time, I invited him to celebrate mass in the Jesuit Volunteer house named after him, Raymond House, with a group of young adult volunteers. All present felt not so much in the presence of an archbishop but rather in the presence of a holy human being, a person of God, who cared about them.

As the first lay, Latino, Catholic Executive Director of the Church Council of Greater Seattle, I can surely say that I attribute the inspiration for my growth as a person and ecumenical minister to the authoritative, grounded, and prophetic witness of the beloved Archbishop Hunthausen. Such leaders have much to say to us at such a time as this.

A public reception will follow the funeral Mass. Archbishop Hunthausen will be interred in a private ceremony in the St. James Cathedral Crypt later in the day.