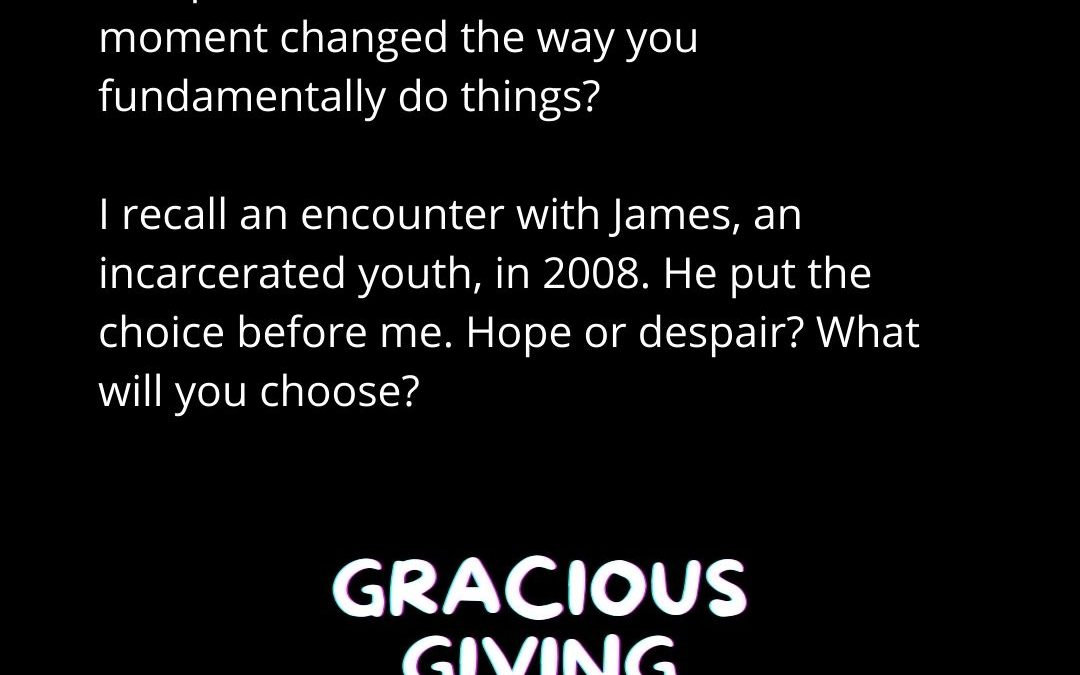 Today, while doing my morning devotional, the question rose: What encounter or moment changed the way you fundamentally do things?

I recall an encounter with James, an incarcerated youth, in 2009. He put the choice before me. Hope or despair? What will you choose?

While I say that James put the story before me, it was really the totality of his circumstances. We met for the last time and played cards in juvenile detention during free-time. He loved to play hearts. With a couple other youth, we talked about what is next.

He told me that he would probably start using again. Why? He was returning to his drug-addicted mother who continually invites him to use with her.

I asked about his father. He was a member of a gang and was responsible for moving guns around. James thought he would never live to the age of 21 if he went there.

So that was the choice before him. Addiction or death.

I left juvenile detention that night with my heart broken and in rage. I know the statistics. He was a Black youth, that counts against him in the juvenile justice system due to implicit bias. He was impoverished. His parents were less than ideal. He was undereducated (although smart).  He was an addict, himself. These statistics each increase the chances of incarceration.

What hope does a 16-year-old boy have when everything is stacked against him?

The desecration of hope sat heavy on my heart that night. In fact, I could not even talk to my family when I got home. Actually, just remembering it now, 12 years later, while I am typing this, tears are flowing.

I wrote this Psalm of Lament as a response and as an indictment of all those that had failed James:

hatched and was formed

limb to limb and

of a crack pipe

out are cut off at

in defiance of the call

the room as we

continue to bleed the

fear and shame and

the lie of the only way

being my way standing

on the corner shouting

the cosmos as the

guilty to sheol while

breath of hope into a

to the ramparts and

calling forth the final

Unfortunately, there are more young people like James affected by juvenile incarceration. Please, let us not fail them.

If you can give a donation to the Youth Chaplaincy Coalition right now, we are making a special effort to get a workbook titled “Ink About It” that is designed to be used with a youth and a skilled, trained mentor to create pathways to success.

« Building a Movement: Cesar Linares on organizing from the heart | A message from Michael »