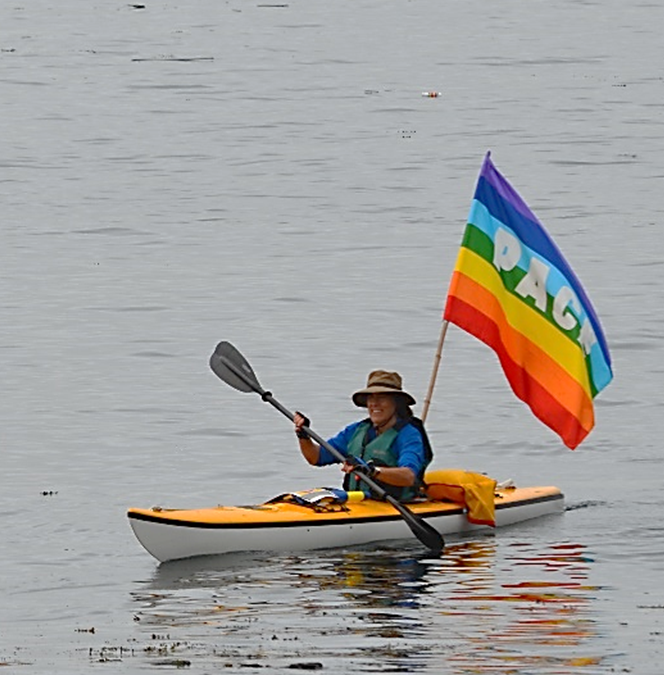 Sharing the below events from our friends at Ground Zero Center for Nonviolent Action.
2022 Pacific Northwest Interfaith Peace Walk
The time has come-to abolish Nuclear weapons & stop all wars.
南無妙法蓮華経Na Mu Myo Ho Ren Ge Kyo―In Respect of All Life
We will walk toward the abolition of nuclear weapons and the cessation of all forms of war and violence.
DAILY SCHEDULE
7/30 Sat.. Portland OR.
7/31 Sun. Vancouver WA
8/4 Thu. Olympia
8/5 Fri. Tacoma
8/6 Sat. Lake Forest Park- Green Lake, Seattle (Hiroshima Day Lantern Ceremony)
8/7 Sun. Poulsbo- Ground Zero Ctr.
8/8 Mon. Hiroshima Nagasaki Day Weekend at GZ Ctr.
CLICK HERE TO VIEW/DOWNLOAD THE DETAILED SCHEDULE
This annual peace walk is sponsored by Nipponzan Myohoji Buddhist Order, Eugene & Tacoma Catholic Workers, Ground Zero Center for Nonviolent Action, Lake Forest Park for Peace, American Indian Organization for Change, Footprints for Peace, Bainbridge Island & North Kitsap Interfaith Council and more.
Contact: Rev. Senji Kanaeda 206-780-6739, 206-724-7632 (cell), or kanaedasenji@gmail.com, 6154 Lynwood Center Rd. NE Bainbridge Island WA 98110
On Jan. 22,2021 in the winter of the world’s COVID-19 disaster, a landmark treaty for the realization of world peace came into force at the United Nations. That’s TPNW (Treaty on the Prohibition of Nuclear Weapons). And from this Jun. 21, 2022, they are holding the first conference by the over 50 concluded countries in Vienna. Our earth is filled with events that make us realize that we are at a big turning point during this world-wide calamity.
Now we are facing the danger of nuclear war from the cause of the war by Russia to Ukraine. At that same time global warming has continued and the future is dark and uneasy. The future of humanity is certainly in jeopardy.
Now, with the opportunity to enter into force of the TPNW, we will walk and pray and convey the message of peace and nuclear abolition. I believe that is one of the things we can do. We want to walk together in parts of Oregon and Washington State for an hour, a day, or a week in this moment. We are currently building a spiritual symbol for world peace-the Peace Pagoda-at our destination at Ground Zero Center.
Gassho (palms together) 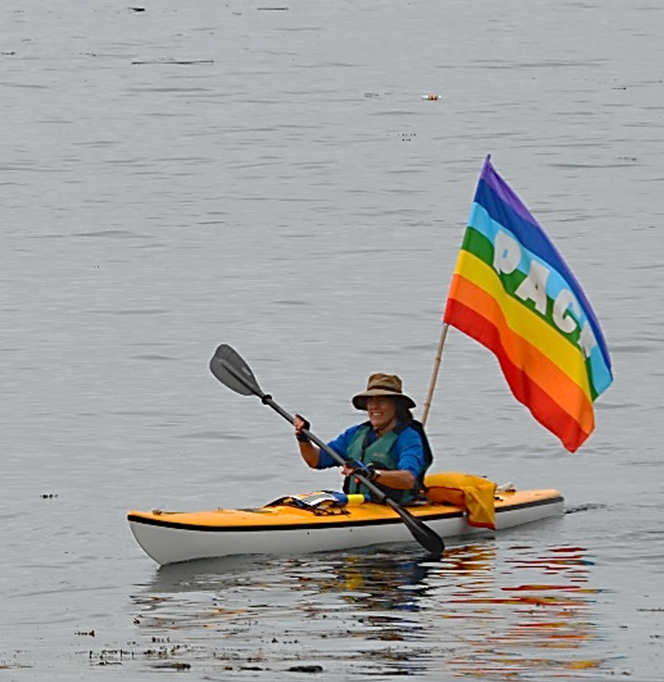 Other peace activists will meet on the newly rebuilt Pier 62 on the Seattle waterfront at the same time for a nonviolent demonstration against weapons of war.
What: Peace activists at Seafair. Peace Fleet! This is the twenty-first year for this demonstration.
When: Monday, August 1, noon, Peace Fleet in Elliott Bay.
Where: In Elliott Bay, near Pier 66.  Bell Harbor Marina will be open for kayaks and for mooring vessels. Demonstration on land on Pier 62.
Why would we demonstrate for peace at a Seattle maritime festival? We are here for the unrepresented and forgotten victims of these weapons of war and to call attention to the crimes of our nation. And because the celebration of warships in our harbor helps bring about the normalcy of modern war.
The fleet arrival at Seafair is a public relations and recruiting event for the U.S. Navy. Previous years have brought Trident nuclear submarines complete with nuclear warheads and Navy warships used to launch Tomahawk cruise missiles in the first and second Wars on Iraq and the twenty-year War on Afghanistan. The fleet is displayed for five days in downtown Seattle at tremendous cost to taxpayers while crucial social services in education, health care, housing, and transportation are impaired for lack of funds.
Photo of Mira Leslie with her Pace flag with rainbow colors, at Peace Fleet! 2013, by Karol Milner.
Contact: For more details, please contact Mary Gleysteen at marygleysteen@gmail.com; Rodney Brunelle at rodney.brunelle@gmail.com; or Glen Milner at gk_milner@comcast.net.
Glen Milner (206) 365-7865
Mary Gleysteen (360) 265-1589
Day of the event (206) 979-8319
« Accompaniment Volunteer Training: Are you interested in joining us?? | QuEST is Searching for One More Young Adult Fellow for 2022-2023! »