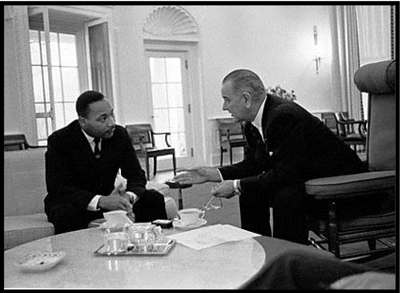 Marching to Selma: How MLK, LBJ, & The Civil Rights Movement Changed the World

Fifty-one years ago in March 1965, the nation watched as Alabama state troopers brutally beat civil rights marchers on the Edmund Pettus Bridge in Selma in what became known as “Bloody Sunday.” Two weeks later the same marchers walked 54 miles to the Alabama capitol in Montgomery, and five months later Congress passed and President Lyndon Johnson signed the Voting Rights Act — one of the most important pieces of legislation in the history of American democracy. This lecture series examines the strategies that propelled the civil rights movement to this moment. Fifty years later, the battle for voting rights for all Americans has returned to the center of the nation’s democracy.

Lecture Speaker: University of Washington Professor David Domke
Dates: Five Tuesdays in August 2016; 6:30 p.m. in Kane Hall 120 for all dates
August 2: “Montgomery: A Mass Movement Begins”
August 9: “Nonviolence and the Soul of America: Nashville to Birmingham”
August 16: “Mississippi: The Magnolia Crucible”
August 23: “Lyndon Baines Johnson: The Improbable President”
August 30: “Marching to, in, and from Selma: We shall overcome”

$20 suggested donation per lecture. All proceeds will go to support students and projects at the University of Washington or Bellevue College.