“A Lenten Reflection at a Moment of War” by Michael Ramos 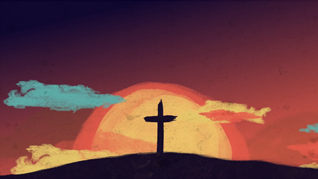 “Lord Jesus, have mercy on me.”

I first came across this prayer as I prepared for the Plowshares Pilgrimage, a walk of 2,000 miles from the Pentagon to the Pantex Nuclear Weapons Plant – where we fasted for four days – near Amarillo, Texas, in 1983.  The prayer was found in the anonymous Russian classic, The Way of a Pilgrim.  As I join my tears in lamentation for the horrors being wrought on civilians, city and countryside in Ukraine, I experience this prayer, meant to be repeated over and over, as consoling as it slowly weaves its way into my heart.  At the same time, I see it as an invitation to change, to move from words of peace to the action of peacemaking as a way of life.

This deeply Christian prayer has global resonance, particularly during the season of Lent, a time of reflection and repentance for ways we have fallen short and separated ourselves by omission and commission from God.  The gift of the prayer is not to browbeat ourselves or to dwell on a perceived unworthiness, but to free our hearts for authentic relationship with the God who does not abandon us but rather ushers us forward into the divine experience of generosity, companionship and creativity.  Peter, the disciple who denied Jesus three times, is the one who Jesus calls upon to lead the Christian way.  In this prayer, then, there is hope for all of us.

This prayer, perhaps, is one we can share in spirit with the people of Ukraine and Russia at this very moment, including millions of refugees, experiencing powerlessness in a time and place of war.  We can yearn for the conversion of hearts that could ultimately yield a just peace, realizing that we are diverse peoples who are both siblings and creatures of a common humanity.

In the context of the United States, the prayer is a reminder of our complicity with militarism, nuclear weapon threats, foreign interventions, and a permanent war economy.  Our acceptance of the history of empire and affirmation of American dominance of sovereign nations or even “spheres” – not to mention promulgation of wars since World War II – are moral failures with catastrophic consequences.  The horrors of the Russian government and army in Ukraine are of the utmost concern in this time of crisis.  We are also invited to renewed accountability for our own nation’s actions, past, present, and potentially to come.  This accountability comes at all levels of life, personal, religious, societal, national.  Such accountability is necessary for a people that is charged by spirit to promote the sustainable, inclusive liberation of all.

Lent is also a time of awareness and awakening.  Our practice of compassion may have been lulled to sleep by our busyness or our narrow-mindedness.  The consumer society is a type of cholesterol, silent yet potentially deadly, that builds up and inoculates us against feeling sorrow and suffering.  The recent report from the Intergovernmental Panel on Climate Change (IPCC) suggests that we have less time to reduce emissions and other impacts of climate change, in order not to exceed the 1.5 degrees Celsius rise in temperature threshold, before reaching the point of no return.  Our window is “brief and rapidly closing.”  (Jonathan Lawson, Climate Solutions newsletter, March 3, 2022) Imagine holding a blue-green ball in our hands.  We can bring the earth into our awareness; we can realize that we are of the earth and for the earth.  We are in deep relationship with the earth and so have the mandate to care for it by reconsidering our lifestyles and their impacts, particular upon the Global South.

Finally, Lent is a time of generative faith that an abundant and just world is possible.  Our vision just needs to expand to see all humankind as one global village.

If our view is global, we may see suffering in places where it manifests itself most acutely, on parts of the planet that do not get as much media attention:

The brutal and unimaginable invasion of Ukraine by Russia has generated fierce opposition the world over.  Even for those of us committed to non-violent struggle, the courage of the Ukrainians to resist subjugation and to save their nation is testimony to the power of a people to live in the freedom of self-determination and democracy.  Gandhi himself taught that resistance to evil and injustice, even with force, is preferable to passive acceptance.  As with lesser known conflicts, the awakening of conscience of citizens of the world is disturbingly slow.  Civil society from various nations could have, should have spoken a word of solidarity, human-resource development, non-violence training, and learning from Ukrainians in exile in the years since the takeover of Crimea in 2014.  And we ought to have held elected leaders in the U.S. held accountable for mythologizing Russian autocracy and aiding and abetting signs of the perpetration of evil, now full blown in Ukraine.

The damage to the Babyn Yar Holocaust Memorial Center by a Russian missile underscores Ukraine’s unique experience of enduring two crimes against humanity: the Nazi atrocities against Jews and other Ukrainian citizens during World War II and Soviet-engendered famine leading to millions losing their lives.

Today, the invasion of Ukraine is a third crime against humanity there, unfolding to the eyes in destructive detail.

The response to the humanitarian crisis has been enormous in Europe and warmly open, for the most part.  The fear and angst on the faces of millions of women and children – and some men as well – have led to an amazing outpouring of compassion and solidarity.  Would that refugees in other places be treated with the same generosity of spirit, material assistance and temporary protected status.

Tarake Bihane commented in the New Yorker, “When you talk about Ukraine, everyone wants to listen, everyone opens their heart.  When you talk about Eritrea, Sudan, Somalia, no one wants to know.  They say, ‘No, but it’s different.’  Why?  We come from Africa, from Syria, from other places, we are nothing to them.”  (Alexis Okeono, “Europe’s Other Migration Crisis,” The New Yorker, March 2, 2022) This message carries significant weight in reflecting on the migrant crisis in southern Europe, where millions have risked their lives having trekked through Northern Africa and having survived (not always!) on rickety and overcrowded boats.  Or, Haitians and Central Americans excluded from seeking asylum at the Southern border into the United States, with an archaic law, Title 42, still being cited allowing for denial of entry due to the pandemic.  We also hear of African students in Ukraine not being received into neighboring European countries.  The shrapnel from cluster bombs aimed at civilians does not discriminate.

Repentance is about the transformative turning our hearts to the ways of the Spirit and the risk-taking embrace of our common humanity.  I am moved to a different kind of fast this Lent than one of intake of food on a particular day.  The Lenten fast I hold is to listen to the cries of suffering from systemic injustice, especially in the context of hegemonic war-making and to stay awake; now awake, to commit to change my practices in tune with the spirit of life, guided by a conscience formed by our shared unity as human beings in kinship with all of life; and transformed in values and orientation toward dismantling oppressive systems, to act response-ably within my capacity, with heart-driven audacity.  It is the fast that Isaiah speaks, to break the chains of oppression and to practice transformative justice, that God most passionately wants.  By undertaking such a fast, God’s invitation and challenge is revealed: Creator-with-us calls us by our true names and incarnates within us our vocation to be agents of change.