1981: “Struggling Together For Justice” by Cindy Domingo 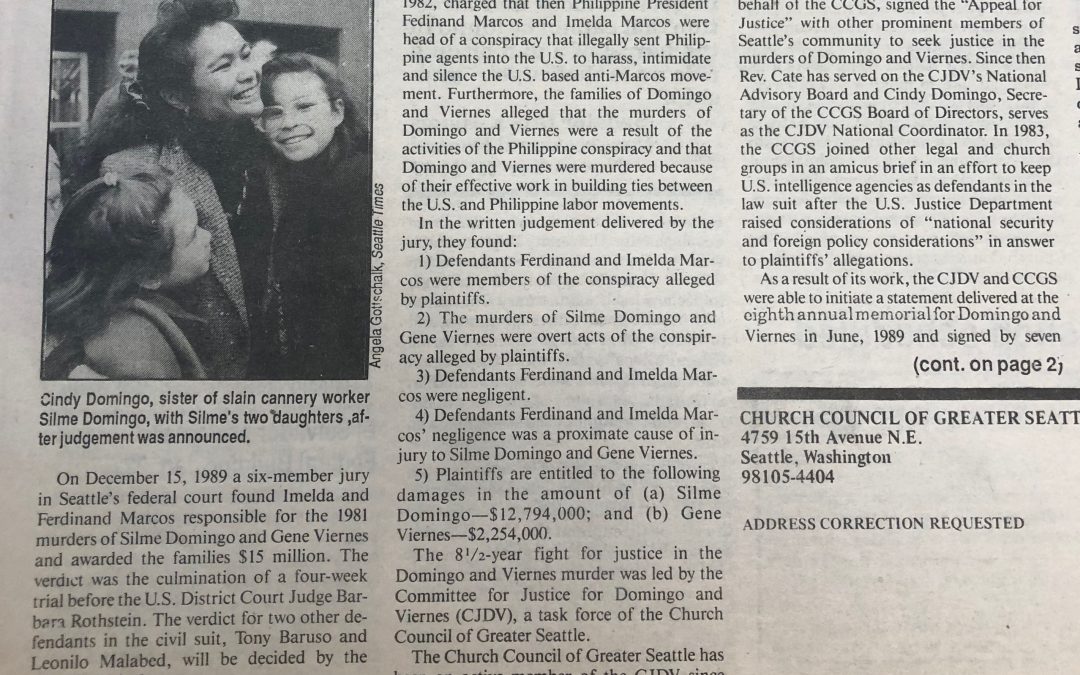 I first came into contact with the Church Council of Greater Seattle in June 1981 in the aftermath of the assassinations of my brother, Silme Domingo and fellow labor leader, Gene Viernes.  Both were leaders in the anti-Marcos, pro-Philippine democracy movement in the US and officers of the Alaska Cannery Workers’ union, Local 37, ILWU.

Under the leadership of the Reverend Dr. William B. Cate and the Reverend Timothy Nakayama, the CCGS formed a task force to lead in the struggle for justice in the murders of Silme and Gene, join others in the Committee for Justice for Domingo and Viernes for over eight years to win a landmark federal lawsuit against Ferdinand and Imelda Marcos for their role in the murders and the harassment and surveillance against the US based anti-Marcos movement.

The families of Silme and Gene are forever thankful for the role of the CCGS and especially Dr. Cate, Rev David Bloom, Jan Cate, Rev Nakayama and the Asian American Pacific Task Force (who formed out of the task force formed around Silme and Gene’s case) for their role in bringing justice in the murders of Silme and Gene.  Without the leadership of Dr. Cate, the strong support of the faith community would not have played the important role in this justice effort.

I made lifelong friendships through this work in the Church Council that continue up through today.  It was a transformative experience and led me to fully appreciating the positive role the faith community can play in our society in working for racial and social justice.

Photo: The Source January 1990 (The Source was a monthly publication of the Church Council of Greater Seattle)